A protest by workers of Trendyol, one of Turkey’s largest e-commerce companies, in late January has set off a wave of similar protests and strikes by workers in this sector across the country, as employees protest working conditions and wage increases which have failed to keep up with soaring inflation.
Following a strike and protest outside of the company’s Istanbul headquarters, Trendyol workers from other cities including Eskişehir, Diyarbakır, and İzmir also joined in the strike. The workers emerged successful on 26 January, when Trendyol agreed to a 38.8% pay raise for its employees.

The success of Trendyol workers has inspired similar protests by the employees of other delivery and courier services throughout Turkey such as Yemeksepeti, Migros, Alpin Çorap, and Yurtiçi Kargo. In the wake of Trendyol’s success, Medyascope spoke with striking couriers at protests in Istanbul, Ankara, and İzmir.

A demonstration of workers outside of Yemeksepeti offices in Ankara was headed by Çağdaş Yavuz, President of the Confederation of Motorbike Couriers. In his speech, Çağdaş said “I am sorry, but my courier brothers will not be run over by cars just to fill someone’s pocket. We will reclaim our rights,” referencing the subpar working conditions experienced by Yemeksepeti workers. Yemeksepeti is among Turkey’s largest online food delivery services, but has come under fire recently for its subpar treatment of workers. Inspired by Trendyol workers’ success, Çağdaş appealed for wage hikes, saying “Just yesterday workers at Trendyol claimed their rights. They received a raise from 11 to 36.9%. Why can’t Yemeksepeti do this?”

Medyascope’s Senem Büyüktanır spoke with strikers attending the Ankara rally in which Çağdaş spoke, who voiced complaints such as the inadequacy of company-provided clothing in wintry weather conditions. Speaking to Medyascope, one worker said: “We work with our own clothes under the coats they give. When we get on the bike at midnight, we experience a -15 degree temperature as if it’s -30.”

Describing his frustration with low wages and lack of protection for Yemeksepeti workers, one attending the event in Ankara told Medyascope: “They tell us: do not interfere, you are just our workers, just do your job and you will make your money. But if we get into an accident, or get sick, they do not want any responsibility and they just try to get rid of us. Last year, Yemeksepeti gave us our rights and we made our money. This year, we also want our rights and our money. We want to be heard.  Our goal is not to stop working or to quit. If we just wanted to quit, none of us would be here.”

A similar event took place outside of Yemeksepeti headquarters in Istanbul’s Şişli district. Despite a nearly two-fold increase in profits experienced by Yemeksepeti during the pandemic, the company’s workers have seen their wages stagnate amidst crippling devaluation of the Turkish Lira. One courier said: “We are here because we do not believe that they have increased our wages.” When asked what their specific demands are, he told Medyascope “We are expecting a minimum 5500 TL [monthly wage]. Our friends working in the warehouses earn 4800 TL. We are out working in the snow and cold and earning only 4200 TL. This is not enough for us.”

Worker protests against Yurtiçi Kargo courier service have also taken place following Trendyol’s success. A demonstration outside of a warehouse in Istanbul’s Samandira district on Wednesday. Protesting a proposed 17% wage hike from the company, couriers spoke to Medyascope correspondents Aytuğ Özçolak and Ufuk Çeri about their demands. “Yurtiçi Kargo has basically told us: everything is your responsibility. The vehicle you drive, the petrol you use, any associated taxes or expenses: they’re your responsibility, they say. This is just the way the system works, they say. All we are supposed to do is receive our wages and that’s it.” During pandemic conditions, this courier described how the company provides no leave in the case of sickness or to attend a funeral after the death of a loved one. “They provide no paid leave. If we take time off to be with our families, we must find someone to work in our place and it means that we will not make any money.”

The system used by Yurtiçi Kargo, in which workers are paid based on the amount of cargo they deliver, makes paid leave essentially impossible, said the courier. “You make as much money as the cargo you are able to distribute. So any time you don’t work is taken at a loss.” He added that this system means long working hours for many Yurtiçi couriers: “During busy times, many of our friends work till 10 or 11 in the evening. You are not allowed to leave work until all the cargo is distributed.”

Supermarket giant Migros has also seen protests by employees in recent days. Yesterday (4 February), at a warehouse in Istanbul’s Esenyurt district, workers staged a demonstration. A recent company decision to increase worker wages just 8% above Turkey’s 4280 TL minimum wage was the main focus of worker strikes. “We demand a 70% raise,” workers union chairman Neslihan Acar told Medyascope. “No official meeting has taken place with the company,” she said, “Only the warehouse manager talked to the workers. He said they would not get a raise of more than 8%. We continue to wait. Our workers are determined. There is talk of quitting work at other Migros warehouses as well.”

The workers’ claim of an 8% increase was disputed by Migros’ European Distribution Center, which released a statement claiming the increase had been much higher: “The alleged 8% annual wage increase at the warehouse in Esenyurt  is completely false and speculation…There was an average of 39% in the wages of employees in 2021…and with the 2022 minimum wage increase the income of all employees increased by 54% on average. All of our employees working at the facility are also given legal and social rights.”

The coronavirus pandemic, which arrived in Turkey in March 2020, has seen an explosion in demand for take-out food delivery, grocery delivery, and e-commerce in Turkey. While companies like Yemeksepeti, Trendyol, Yurtiçi Kargo, and Migros have seen record profits, stagnant wages and continuous currency devaluation have spelled hard times for the companies’ workers. In addition to stagnant wages, dangerous working conditions experienced by couriers and lack of benefits and insurance provided by these companies have added to worker dissatisfaction. As one Yemeksepeti courier in Ankara said: “At this point, there’s no point for us to go drive around and stay out in the cold.“ 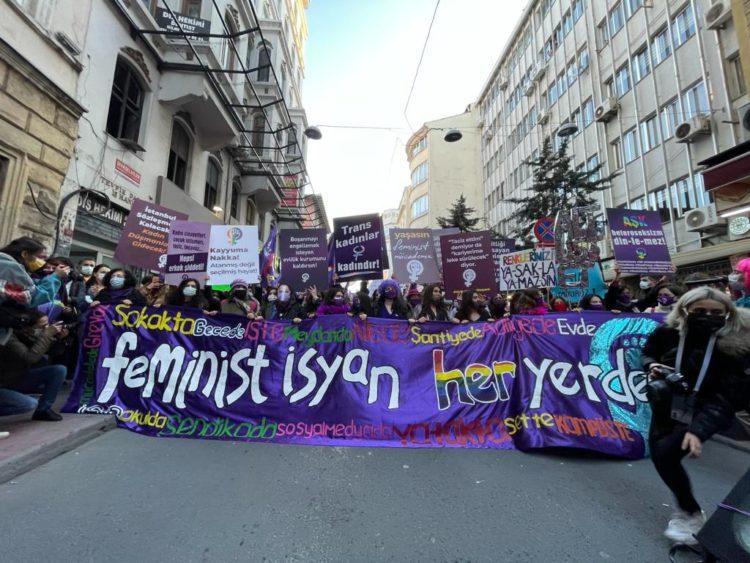 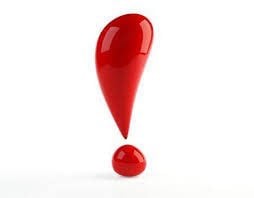 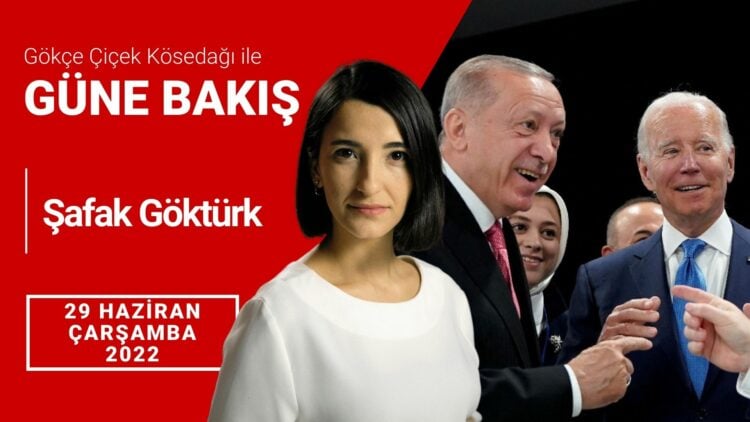 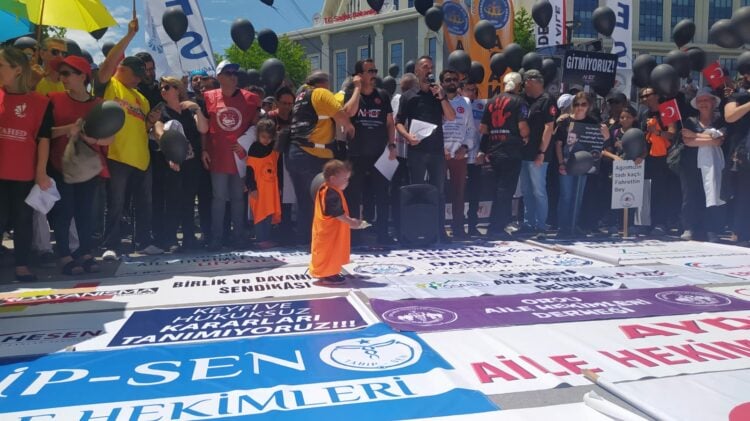 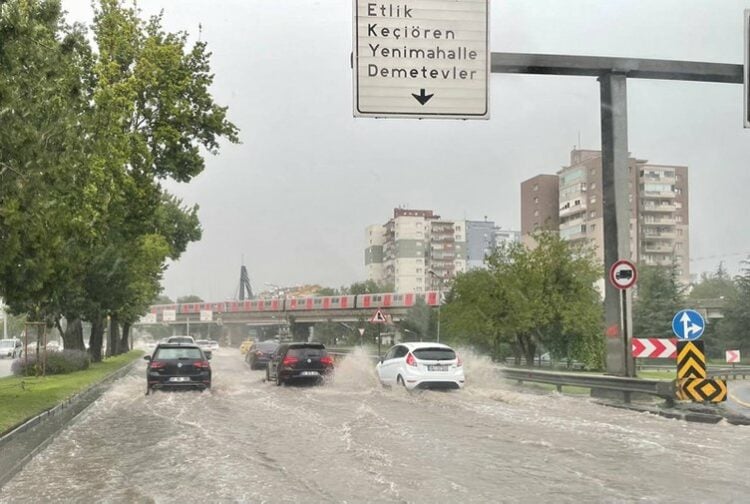